This should be useful!  Its an SDK to leverage C++ and AWS services largely for game development. AWS services like S3 for storage, DynamoDB, Cognito for identity management, and others Im sure will be accessible.  I cannot find the list yet but it would be interesting to see if it hooks to Elastic Transcoder or AppStream services too.

The SDK is opensource, on GitHub and in Experimental state.
Posted by Shanon at 6:22 PM No comments:

Im really excited! Valve are openly investigating a Valve steam client and having spent literally years on getting the damn thing running in all its updates over years in Ubuntu, I couldn't be happier!

This undoubtedly means continued work in crossplatform client online games - Windows, Mac and Linux gamers (and, sigh, consoles too I suppose) all on one game server - but also native running of the Source 2 engine.  Previoulsy Ive been using Wine / Cedega for all this but if its native, then thats just sweet!
Posted by Shanon at 7:12 PM No comments:

A buddy from the local independant game makers initiative has released a public alpha version of Infinite 8 Bit Platformer.  Available for Windows, Mac and via source compilation for Linux, check it here


Infinite 8-Bit Platformer
I help by QA testing various builds and the test sessions have been spontaneously enjoyable.  The platforms I got going were Ubuntu Linux and Windows Vista. 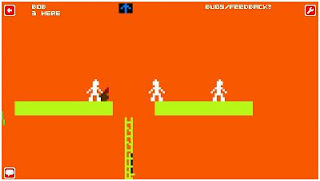 The game is like Minecraft, except in 2D, and is less blocky, and more pixely, so to speak.  And no enemies, other than your own possible lack of creativity.  Once thats overcome and with people around in the same level Infinite is an Indie free-for-all of unique fun!
Posted by Shanon at 1:44 AM No comments:

Being a big fan of the PS3 but having divided interests for playing games there and on the PC I get into stupid situations.  For instance, I actually bought Battlefield Bad Company 2 on PS3 then a few months later on PC just because I had mates using both platforms!  That's just silly.  When will games be truly platform independent?  Why is that even important?

I'll address those questions in another blog entry. But im excited!  The news I discovered today is quite awesome - late January Valve announced Portal 2 to have cross platform multiplayer co-op. Specifically, if you buy the ps3 version, the game keys will work on PC and Mac versions as well. Oh JOY! Additionally, players from those 3 platforms can join the same multiplayer game. This is really important step to cross-platform multiplayer gaming.

Previous developer reasons for not going down this path have been issues like PC mouse and keyboard users versus console controller users.  For first person shooter (FPS) games the mouse and keyboard traditionally offer more accuracy than a controller.  The result is for console versions of the game developers implement different aiming mechanics such as auto-aim, or aim assist that enable a better gaming experience on the console. However this would create a mis-match and unfairness if players on the PC played against players on the console.  The argument deepens, because there may be a server setting to disable auto-aiming, giving PC players the advantage of a better accuracy with the superior mouse and keyboard etc..

Portal 2 multiplayer across the platforms may work however because its co-operative.  There wont be arguments about fairness of player reaction, aiming, shooting and hit mechanics and physics when it comes down to who shot who.  Co-operative cross platform multiplayer games will probably work in general - for example sports games. There's little reason why the either PC or console inputs would have much affect on the multiplayer experience.

Pile of Steaming games for Mac

So Steam for Mac has been officially launched, after the beta's several month run.  I think this was a long time coming and a lot of effort has been put in by Valve to officially support the platform, much to Apple's and Mac gamer's joy.

Theres a sizeable list of available games, although not very common games currently make the majority. The AAA highlights are Portal and Civilization IV.  Some popular indie games like World Of Goo, Galcon and Machinarium are also in there.  By supporting Portal Valve showcase that their Source engine works and undoubtedly other Source games are just around the corner such as Team Fortress 2, Left 4 Dead(s) and Half-Life 2 episodes.  All games are "Buy once. Play it on Mac or PC' which is a nice feature and a step towards the ubiquitous gaming platform idea.

Valve distributing others and publishing their own games to Mac has very large, if not enormous ramifications for Codeweaver's Crossover Games software and Transgaming's Gametree distribution service. Both different business models, both affected by Valve's Mac move.  (Im going to ignore any other Mac game distribution platform for the time being)

A quick look at Crossover's supported games site shows top games are Steam related and whilst are not on Steam for Mac just yet (other than Portal), with Source support will probably be available very soon.  This means there's instantly no need to keep using Crossover Games software if your favourite game(s) are available on Steam, especially since its an officially supported method of playing the game.  To be fair Crossover still has 2000+ games in some state of working or testing available for Mac gamers to play which will take Valve some time to catchup.

Transgaming Gametree website works differently - for some games they partner with developers and publishers to package their Cider software to enable Windows games on Mac.  For other developers a platform to sell their already working Mac game through a growing channel.  So for the latter thats direct competition with Steam for Mac.  The advantage with Gametree is no Steam log-in before playing the game - games are downloaded and are a native executable like another other installed application.  Steam has come a long way but the initial days on the PC were just frustrating.

To add to Gametree's competition though is the same game being available already. At launch, and probably deliberately, is World Of Goo @ USD$19.99 by itself and also for the same price in a 5-Indie Game pack which also includes And Yet It Moves, Osmos, Machinarium, Galcon Fusion.  Gametree has been selling World Of Goo for USD$19.99 for some time.  Also Quantz retailing on Steam For Mac @ USD$9.99 and on special for USD$3.00 sells on Gametree for USD$12.99.

Crossover and Transgaming have both helped gamers 'crossover'/'transgame' from Windows.  They need to now re-evaluate their offerings as the Steam bulldozer rolls in.  Its great news however for Mac gaming and players, and also cross-platform gaming all-round.

I believe also that Mac and Windows gamers using Steam can join the same servers! I think thats cool. Wish this was the case for console and PC but thats another blog.

Some more reading:
http://arstechnica.com/apple/news/2010/05/steam-for-macs-launches-with-free-portal-63-games.ars
Posted by Shanon at 10:28 PM No comments:

Second post ever, and actually its a summary of other interesting posts.  A blog of blogs!

A review of Codeweaver's Crossover product (for Mac/Linux) vs Wine
http://www.raiden.net/articles/Review_Crossover_Games__Linux_813/

For those who dont know Wine is the base open source project that enables most Windows applications to run on unix-like systems such as Linux and since moving to Intel processors, the Mac OS.  Crossover is the commercially packaged, slightly enhanced version of Wine. You can pay for Crossover, get support and updates etc and perhaps a little more functionality with it too.

Cedega is a competitor to Crossover (probably the only real commercial competitor) which also is an extension of the Wine project. Check out links to all of these companies on the right of my blog page here.
Posted by Shanon at 5:54 PM 2 comments:

Yet another blog surfaces, and im going to write about my musings in cross platform video game testing and experimentation. Not sure how to make it interesting yet! How about this -

~A bit about me.~
These are my stories.

Posted by Shanon at 1:26 AM No comments: